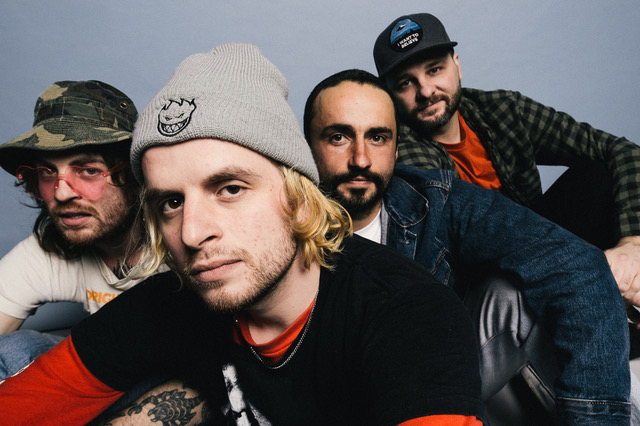 LOSER are one of those bands that really hit the ground running upon inauguration and cease to slow down. It's what we love to see, and equally what we love to hear - which leads us to the release of (already) their second full length record. All The Rage is, well, an appropriate title for such a band and album, who are out there making a lot of noise for themselves, literally and figuratively.

Born out of Melbourne/Naarm, the rock group built up some momentum after their self-titled debut single in 2018, leading up to the release of a debut record in 2020. But the shape of a follow-up record came after vocalist Tim Maxwell suffered a breakdown in the studio while recording the album's lead single On The Edge, where the resulting self-recorded album comes as a lifeline and offers something to those struggling with mental health in the pandemic.

Ultimately All The Rage is a record of hope and encouragement to stay strong and to keep pushing forward. That no matter what you or the world is going through, you're not and you never will be alone.

Bassist Craig Selak adds to this by saying “I hope there’s something on this album that people feel like they can relate to. Even a song like ‘Skyward’ – I mean, it’s about aliens, but it’s also about feeling like when shit’s hitting the fan, you can step out and just focus on yourself....I think that’s the overarching theme of the album: you don’t have to step away and hide from the world, you can look within and find something that makes you feel more comfortable. And that really sums up the personal growth we all went through in trying to record this album, learning not to overthink things, and Tim’s personal journey with his mental health over the pandemic".

In love of this record, and wanting to share some love with LOSER's local community, we asked Tim to share with us five local bands that are "all the rage" in Melbourne, kicking off the new series Local Takeaway on Homegrown Sounds.

‍‍These crazy lunatics put on one of the best live shows in the country. It’s wild with no holds barred, just pure fun mixed with lingerie and sex toys. I recently recorded their debut album and I highly recommend checking out the song ‘Peggers Can’t Be Choosers’.

A punk band full of nurses and heavy riffs! Sign me up please. These legends have been ripping through dive bars for a few years now. If you like energetic post-punk paired with witty nurse jokes then this is for you. Listen to ‘Hot Doctor’.

One of Melbourne’s finest Americana/heartland newcomers. Horns, acoustics and rock guitars make up this seven-piece. It’s like Bruce Springsteen had a baby with the band. Good shit. Listen to ‘Alexander’.

DGC are also pretty fresh on the scene! They play a brand of pop-punk that makes you want to cry and jump at the same time. I recently worked on a few songs of theirs producing. Listen to ‘Sick Sad Girl’.

Dilly is a solo artist from Melbourne who used to play in the alt-rock band Waverley and is now releasing music off his own belt. It’s feel good alt-rock with a hint of ELO. Listen to ‘Trippin’.