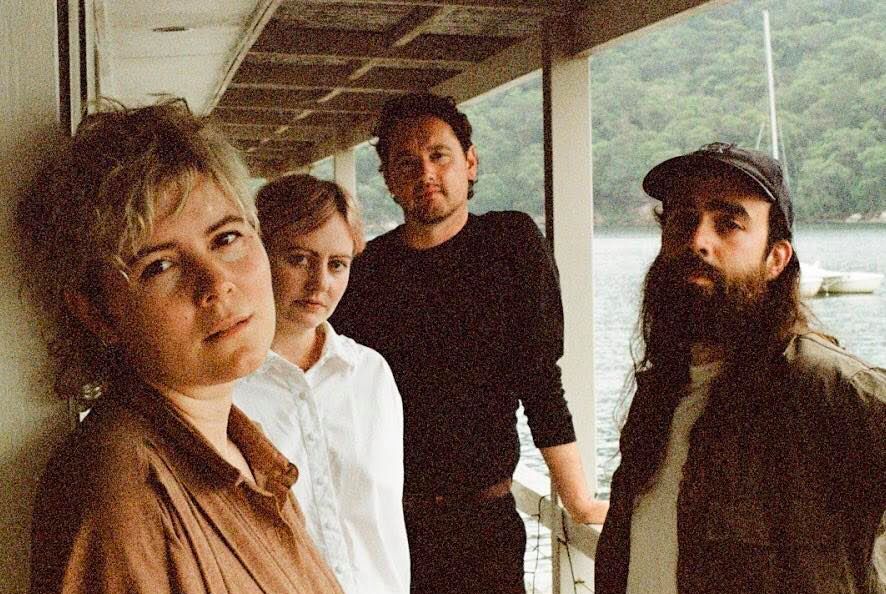 Being in love is not always what it's cracked up to be. Especially if the love we are in is a twisted, manipulative, hurtful situation. Well now we have an album for that feeling. Mere Women are back with their fourth album release 'Romantic Notions'

The album opens with the title track, a minimally arranged and brooding examination of a relationship in a dark place. Dark I think is an appropriate adjective for the album, even the up tempo tunes still reflecting the dark situations the songs are about.

I was really impressed with the arrangement on this one, the addition of additional elements like a wood xylophone on 'Someone Loves You' adding an almost horror movie aesthetic, making the track feel more cinematic and epic giving gravity to the situation. Tonally there is a slight shift after the track 'Interludes' which is a beautifully played and engineered piano piece that really sets up the back half of the album.

To find out more about the album and their current tour, we got to chat to the band quickly before we see them touch down in Canberra on the 19th. You can read all of this below.

First and foremost, congratulations on an incredible album! What are your feelings on the reception on it in these early days?

It’s a bit weird because usually we would have played single launch shows before we released the full album and would have gotten a bit more immediate feedback, but it feels like people are liking the record. I think it’s the best album we’ve made and we’ve gotten some lovely feedback about it so far.

‍As far as getting ready for tour, outside of getting the songs and sets all nailed down, do you have something that is a must to bring in the van?

You’ve gotta have a USB cable to charge phones otherwise you get stuck listening to a lot of country music on the radio when you’re out of the cities. I don’t hate all country music by any means but… there’s some bad stuff out there.

‍What show are you most looking forward to?

Honestly, we’re so excited for all of them for different reasons. Brisbane’s gonna be great because it’s our first show back after about 1 ½ years of not playing. Sydney’s our home town, Canberra’s in an awesome venue and Melbourne is like our second home.

The album is heartbreaking and beautiful, and it feels very personal. Was there any apprehension about sharing such personal stories with the world?

I’ve gotten a lot better at being open over the years, so I think this is definitely the most personal of all of our albums. There’s always apprehension though and I’m really mindful that in sharing personal stories it also affects those around me who are connected to those stories. I just feel so lucky that I have this platform to share things I care about and that people want to listen, because not everyone has that.

Did your friends and/or family have anything to say/find it surprising?

My grandmother has been a huge influence lyrically on this album and I know she was happy with how the themes on the record were explored so that was a big a relief for me. Charms in particular was inspired by her mother so it was really important to me that I got the tone right. I think it means a lot to her that her mum is remembered and acknowledged.

‍How do you feel you have grown as artists since the last album (in the past few years) I feel like I hear lots of different influences and styles in the record, do you have a key piece of art that for you is the fundamental inspiration?

There’s no key piece that has fundamentally inspired this new record. It’s a collection of all of our influences. We went in to the writing process wanting to create something cohesive and well-developed. We took lots of time on it and really thought about what we were creating.

‍How much of the writing and recording of this album affected by COVID?

Mostly it was the recording that was affected by covid. We were in the studio in March 2020 just as it was hitting Sydney. Day-to-day we weren’t sure if we would be able to go in to the studio at all and we were all worried about work and life and unsure about how our lives would change. It was a stressful/weird time and I think some of that tension comes through on the recording.

‍What did you miss most in 2020 (doesn't have to be music related)?

It was music related - Playing shows for sure!! I felt like I lost a big part of my life and my identity last year. Can’t wait to get back into it!

‍What are some bands we should be keeping an eye on in the next year?

I really have felt out of the loop not going to or playing shows but some bands/acts we’ve been loving are Solo Career, Eternal Dust, Repo Man, Prudence, Michael Beach and Slomo.

What can we as fans look forward to at your shows coming up?

We’re just so excited to be playing and so I think these shows are going to be really fun. Most of these songs we’ve never played live before so hopefully Mere Women fans will enjoy seeing the album come to life. We also have some awesome line-ups so I think all of the shows will be a good time.

‍And finally, the Homegrown Sounds classic. Where do you keep your tomato sauce?

I was raised with tomato sauce in the cupboard but I’ve been brainwashed into keeping it in the fridge after living with Flyn – the Mere Women guitarist – for so many years.

As mentioned, the Sydney/Eora post-punk band are on tour to support their fourth album 'Romantic Notions', and you can find all the information below, as well as tickets for their Canberra show on June 19 with Kilroy here.